Top 10 Most Powerful Military in The World 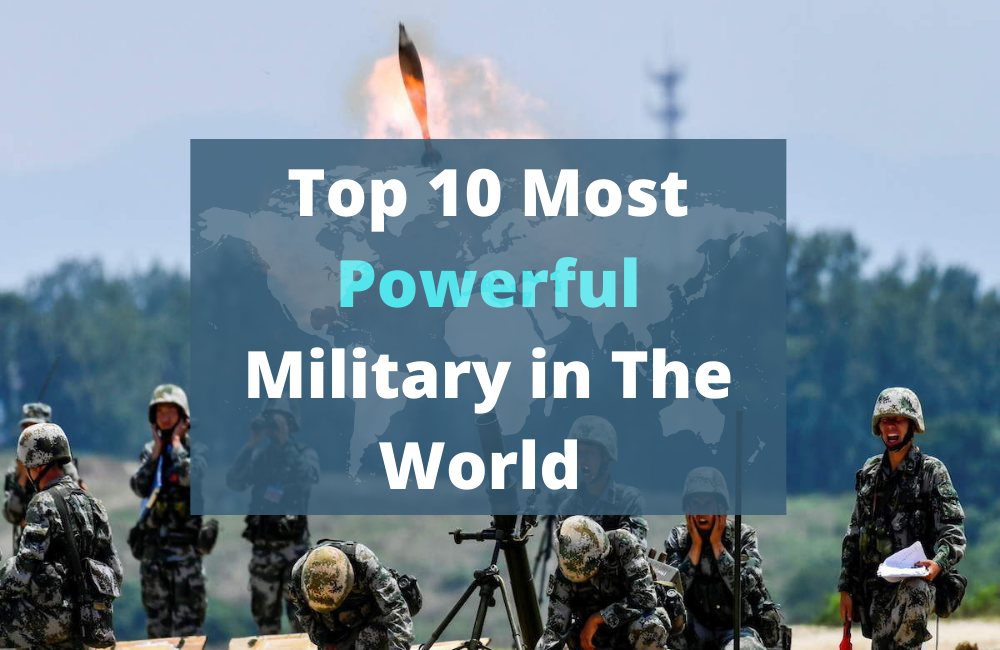 Having a strong army protects a country from potential attacks. A country with a well-trained army, Navy, and Air Force team eventually becomes secure during wartime. No outsider enemy dares to attack the nation easily. Let’s check which countries have the most powerful armies in the world.

Despite the sequester and other expenditure cuts, the United States spends more money on defense. The US has a fleet of ten aircraft carriers. These are the most prominent conventional military advantage. The USA possesses a sizable and trained man force, modernized aircraft globally, cutting-edge technology (like the rail gun), and of course, the world’s most extensive nuclear arsenal. The United States ranks 1st out of 140 countries of the world. The US scores 0.0453 in PwrIndx rank.

Russia has the second-most powerful army in the world. The mighty country holds a PwrIndx score of 0.0501 (in 2022). There is one million active-duty personnel in the Russian army. Besides that, the Russian army has huge reserve troops. Russia possesses the maximum number of tanks (13,000 tanks). It is double the number of tanks the US owns. One million active military professionals are in charge of commanding 27,038 armored vehicles. Russia owns 6,083 units of self-propelled artillery and 3,860 rocket projectors on land. Russian air force consists of 789 fighter planes and 538 assault helicopters. Russia has a formidable arsenal with 62 submarines and 48 mine warfare ships. Russia’s military budget is expected to total $42.1 billion, to put it another way.

China’s arm force has risen in strength and capabilities in the last several decades. China is the most populated country globally, and the Chinese army is the largest military in terms of total manpower. It also owns the second biggest tank and submarine after Russia and USA, respectively. In recent years, armed modernization efforts have made notable progress. Ballistic missiles and 5th generation aircraft have been included recently. That addition might change the face of military conflicts soon.

Indian army is widely known for its bravery. There are an estimated 1,444,000 active military professionals in India. Indian govt spends a good amount on the training and maintenance of arm force. The ranking of the Indian army in the world is 4th. Due to India’s geographical position, the country is surrounded by not-so-friendly neighbors. Indian Army has been engaged in a long-running territorial dispute with Pakistan over Kashmir. India’s defense budget is $73.6 bn. In US dollar. Paramvir Chakra is the highest award one can get for his contribution to the Indian defense service.

Japan grabbed the 5th position in the top ten most powerful defense power of the world. Japan’s Pwrlndx score is 0.1195. The Japanese military is pretty modest compared to other militaries. Though, the country is well prepared. Japan possesses the fourth largest fleet (estimated) of attack helicopters globally. They maintains a ‘self-defense force’ with the fourth largest submarine force and 4 small aircraft carriers. Japan owns a wide and capable collection of military hardware. However, the country has a significant size issue. It is so small that it might not be sufficient in a protected war of the world level.

South Korean army or ROK Armed forces are the largest standing army for the country. The nation maintains a large—well-equipped defense establishment consisting of army, navy, and air force divisions. However, smaller than North Korea, the South Korean army is the largest component with a sizable reserve force. The duration of a military personnel’s service depends on several factors. The types of duty fall under ‘active’ and ‘non-active’ duty. In South Korea, the army and marine duty duration are 21 months, while the Navy duty duration is 23 months and the air force has a duration of 24 months.

The French army is highly trained, professional, and capable of tackling large forces. It’s certainly is a powerful army in the world. France holds the 7th position with a Pwrindx score of 0.1283. France has the largest armed force in size within European Union. Historian Niall Ferguson considers the french army most successful in the history of military power. The country president heads the armed forces as Chief of armed force. Currently, the French defense force has 2,000 army personnel deployed along the border. It includes infantry, artillery, armor, and air defense. Naval and air personnel deployed offshore are also there. The French military setup is capable of handling medium to large-scale international operations.

UK army holds a Pwrlndx score of 0.1382. British Navy has a glorious history to rule over the world. Britain is expecting to decrease the number of armed personnel’s in this decade. Even after a 20 percent reduction of armed force, the British army made a place in the world’s top 10 powerful ammunition. The HMS Queen Elizabeth aircraft carrier was taken into service by the Royal Navy in 2020. It will transport 40 F 35B joint strike fighters over the world.

Pakistan holds the 9th position on this list. Their armed force is organized under the chairman of JCSC alongside the chiefs of staff of the Army, navy, and air force. Strategic Plans Division Force is the critical component to the armed forces’ structure which is responsible for the maintenance and safeguarding of Pakistan’s tactical and strategic nuclear weapons stockpile. Since 1963, the Pakistani military has had a close relationship with China as per the Sino-Pakistan Agreement.

Brazil’s army is the largest arm force in Latin America. Brazil’s Army, Navy, and Air force altogether hold the 10th position in the top list. Brazilian soldiers were in Haiti from 2004 until 2017. They were leading the UN stabilization Mission. In Brazil, the military police alongside the military fire-fighters corps are called an auxiliary and reserve force of the Army. Men of the 18-45 age group are obliged to serve the Brazilian army.

So this is the list of some of the strongest military in the world. A solid army setup is the backbone of a country’s security. Armed forces protected fellow countrymen from outside attacks. Let us know what you think of the article on the top 10 strongest army in the world. Please keep visiting our website for more information.